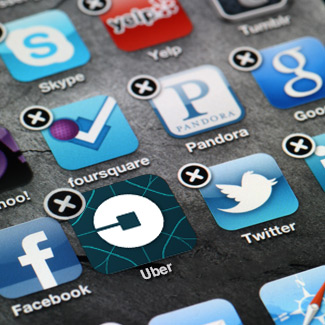 App-based transportation company Uber recently found themselves in the hot seat following the NYC taxi strike at JFK airport in response to President Trump’s travel ban executive order. Uber has been under fire several times as their CEO, Travis Kalanick, has met with Trump several times, and has tried to defend his partnership with Trump amid political strife. The NYC incident was just one misstep along the way that has many users deleting the app altogether.

On the afternoon of January 27, 2017, President Trump signed the travel ban executive order. Immediately thousands of travelers found themselves stranded at ports of entry, as well as overseas where they were preparing to board their flights to the US. This prompted a strong response from protestors and activists who staged a sit in at JFK airport’s Terminal 4 in solidarity with travelers who were being detained without access to outside communications or their lawyers. As the atmosphere at the airport grew more intense, the NYC Taxi union announced that they were holding a one hour strike between 6 and 7 PM in support of the protests.

Once the strike was well underway at JFK, many people noticed that Uber drivers were still attempting to pick up fares, effectively undermining the strike and the protests. Adding insult to injury, Uber’s CEO tweeted shortly thereafter that they had turned off surge pricing in the area and that there were long wait times for rides out of the airport. This tweet added fuel to the fire with many people arguing that it acknowledged what was happening at the airport and further detracted from the strike.

Protestors quickly took to Twitter and other social media outlets to voice their displeasure with Uber’s actions. Angry people across the web swore off the company for not standing with the travelers and immigrants who were adversely affected by the travel ban. Many of them went so far as to delete the app altogether, taking screenshots and sharing them with the world, and using the hashtag #deleteuber. As the debacle unfolded, Lyft made a major announcement that they would be making a million dollar donation to the ACLU, and instantly added to their fanbase all those who felt spurned by Uber’s lack of support.

Despite the heated debates over the travel ban and Uber’s connections to President Trump, the company is moving forward. Kalanick has since sent out various explanations for the mishap, saying that the surge pricing was turned off after the strike had ended, and that the company was simply trying to help people get out of the airport safely. In addition, he has argued that he will continue to meet with Trump in an effort to secure favorable policies for the travel industry going forward, because nobody else in Trump’s cabinet is going to fight for fair transportation and environmentally friendly laws. He stands with several other CEOs including Elon Musk in trying to wrangle the President into staying on a forward looking path.

Little has been said about the incident since it took place. Many people still feel that Uber’s explanation was too little, too late. Others have simply continued to focus on the real issue at hand: the travel ban itself. It is yet to be seen how this incident will affect Uber’s future long term.

The National Limousine Association, Teddy’s Transportation System and the Taxi, Limousine & Paratransit Association continue to warn that using ride-hail cabs are tantamount to digital hitchhiking and that corporate travel policymakers should prohibit their use altogether. Third-party background checks, favored by Transportation Network Companies (TNCs), are 43 times more likely to miss criminality than the government finger-print-backed background checks used by legitimate Connecticut providers. Even Uber’s Terms & Conditions (sec 4, paragraph 2) tell you “not to let persons under 18 even ride their cabs without an adult on board.”