Last week a certain money manager from New Canaan became positively apoplectic when we could not meet his chauffeured car service need on short notice.

We can’t blame him. He and his team have counted on flawless service and never a coverage issue from Teddy’s for decades. But we called several other affiliated limo companies to meet his Sunday night request for a Monday morning car. ..and nobody had an available driver. Our drivers all had assignments already – even me, the company president had a pre-dawn trip to cover.

Teddy’s has always understood a simple ‘yes we can’ is often what our clients covet most from us. “Can I get a 5AM car Tuesday for my boss from Westport to LaGuardia?” Of course – with no pre-dawn surcharge! Midtown, New York to Greenwich tomorrow night? Certainly.

Lately, though, as you have read in so many headlines, the service and travel industries are having once-in-a-lifetime difficulties in finding help to fuel the rapid rebirth of post-pandemic business travel. So many chauffeurs had to leave the industry while it was effectively closed and we are battling to replace that headcount with other world-class professional drivers – no easy task.

Meanwhile, Teddy’s is hearing from so many new people who need professional private car service. So many have moved up to Connecticut during the pandemic. Just today, we booked a first-time ride from a woman whose family just moved to Darien from Brooklyn. We are also hearing from numerous people whose pre-pandemic car service is out of business. At the same time, our frequent business fliers are returning to work at a brisk clip.

We’ve got you. We have your back. But ‘yes’ costs a little more for a while as we rely on independent affiliates and partner providers to help meet your business travel needs. So we’ve increased our surcharge to help us attract and retain the professional chauffeur staff you have come to rely on. We hope you understand. 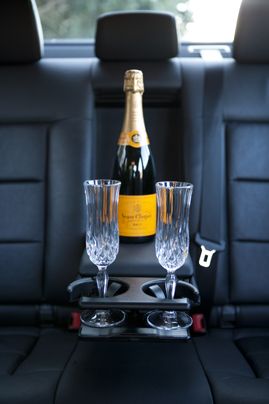 Start your Vacation at your Door

Help someone special Start Their Vacation at their Door

You already know a professionally chauffeured private car service is critical to keeping comfortable, safe and productive across so many road-warrior, business-trip miles.

You may already also indulge in professional car service for family getaways. After all, private driver service is incredibly convenient: Indulge in being the only ones not carrying a parka through a Caribbean airport! Leave them home as you exit to a warm, waiting chauffeured luxury car, SUV or van that will drop you off right at the airport terminal doorway. Leave the baby’s car seat home too and use ours.

Then imagine arriving back at New York’s JFK (or Newark, LaGuardia or Hartford) and heading straight home without having to ride the bus, hauling your bags to the offsite lot and digging your car out of the snow …in clothes better suited for Turks & Caicos! Now you can share your most important travel secret with special friends and family:

Teddy’s is also happy to send you gift certificates in amounts specific to known city-pair fares – you can even pick up the chauffeurs’ tips if you choose.

We are happy to mail your certificate(s) or you may feel free to stop by our new offices at 112 Main Street Norwalk (call ahead so we can have it ready for you).

Rest assured, Teddy’s disinfects each car before each pickup and monitors chauffeur health. We survey client health too. Meantime, most Teddy’s private cars have only two parties per day compared to 17 in a New York cab or app-cab. At the same time, with 65% of our clientele traveling to or from an airport, be comforted by the fact that the airports and airlines are all formally screening them for negative testing too! More

Can you nail your bonus with a ‘secret” extra work week every month?

Think about it: Ninety minutes or more into New York City every day from Weston, Wilton or New Canaan, right? (or Chappaqua, Pound Ridge or Bedford, NY for that matter)  …and double it to come home.

That’s 15-20 hours a week (60 hours a month, conservatively) lost to schlepping from house to car to railroad parking ..with a long walk to the platform. Then: train, subway and how many blocks to your office. ..never mind sometimes shoveling snow to start that whole process. With a Teddy’s, you work or rest door-to-door each way.

Try just a slice to start: Grab another commuter from your ‘social bubble’ and share the ride each day. Try 3 days a week, maybe only inbound – at least that cuts your exposure to crowded trains in half those days. We had two Goldman guys do that for years – they met their Teddy’s driver at the Westport train station three mornings a week for the ride in – at a great discount – and took the train back home. The hardest part was how to split their Teddy’s Platinum Reward Miles. Want to see some math on this? Contact sales@teddyslimo.com.

– pandemic-era ‘rumors of its demise have been greatly exaggerated’ …again

(The answers to the quiz question, the ROI of business travel, is at the bottom of this page.)

It was a typical livery service ‘fire drill.’ As they sometimes do, the Teddy’s dispatchers pulled me away from the phone to run out and drive a Teddy’s private car service customer.

This one was probably the early ‘90’s and the trip was short: Norwalk to probably Westchester County Airport in White Plains (straddling Harrison and Purchase, NY ..and mere yards from Greenwich, CT). Or maybe it was just the eight-mile run to Amtrak in Stamford.

Anyway, one of our full-time professional chauffeurs probably got hung up on the previous trip or maybe this client called and was ready early. The fare, I remember, was a man and a woman and the pickup was at an office building on Connecticut Avenue in Norwalk.

In short order, one of them thanked me, “we heard you were the company president so thank you for coming for us.” If I was true to form, I probably said ‘my pleasure’ followed by “if Stew Leonard can take a register when it gets busy, I can certainly service a VIP customer.”  Tom Peters had recently highlighted Stew Leonard’s grocery store in A Passion for Excellence so it was safe to assume everyone in a business suit knew about the Norwalk grocer.

They asked me how our dispatchers communicated with our drivers and I explained we had three Nextel repeaters and we’d have to dial into the right one depending on where we thought the chauffeur was: was he within a 25 mile radius from the channel 1 repeater on the Chrysler Building in New York City?  …or would the repeater in Syosset, NY work better which gave us good coverage across Long Island Sound into Greenwich, Stamford and Darien, CT. …or maybe the repeater in Bridgeport would work. (Ironically, with this system, the closer to our Westport office a driver was, the worst the radio reception.)

The woman passenger said I might be interested to learn about the project they were just pitching. She showed me a piece of paper with a honeycomb design and said they were going to buy our three Nextel repeaters then build 300 more in our region and 30,000 repeaters across the United States. ..and they were going to call it cellular telephone. That explains the honeycomb.

“Cell phones were going to be the death of the private car service industry.”

We heard that a lot. But business travel continued to grow every year as it always does.

Quite a few years before that, we heard we were upon the demise of business travel with the fax machine became widely available. Then with the 1995-’96 growth of the World Wide Web .. “who in the world would ever need to fly to a business trip again!?” Statistics continued to strongly prove otherwise.

Video conferencing, clunky at first, came quickly on the heels of the Internet and the refrain was the same. But business travel continued to grow significantly nearly every year. For seven consecutive years, Teddy’s was an INC Fastest Growing Companies in America.

AFTER ALL, Face-to-face meetings allow for clearer communication. In addition to being able to read facial expressions, body language and inflection, in-person meetings often end up being more positive and considered more credible than online or virtual conversations according to Entrepreneur.

Without non-verbal cues, you also run the risk of misinterpreting information. In fact, 60% of people regularly misread tone or message when communicating via email or phone.

No matter how much we may like social networking, in-person interactions are at the very core of relationship building, both personally and professionally. In fact, 85% of people believe face-to-face meetings contribute to stronger, more meaningful business relationships.

So, if you want to form true, concrete connections, try to meet in-person rather than online whenever possible according to an article in Medium.

The Medium article also reminds us in-person meetings are more focused and more productive. In fact business travel is said to have better than 12:1 Return On Investment, or ROI according to Business Travel News.

So while you still have to be extremely cautious when you travel and its smart to avoid it a little while longer, if you can, incentives are far too high to believe Zoom is going to be enough to allow you to get the job done faster and better than your competition.

Our time to shine

The COVID-19 pandemic and resulting business crisis come with astronomical human and financial costs. But this week, as folks are starting to head back to LaGuardia, Kennedy, Newark, White Plains, Hartford/Springfield and Boston Logan, I wrote to Team Teddy’s about this being an opportunity to demonstrate the value of a truly professional private car service.

“…business travel managers feel assured their Duty of Care responsibilities are met and this is now more crucial than ever.”

Premium executive transportation has always been a trusted boutique niche in the ground transportation industry which, in general, has as many customers as the airline and hotel industry. But only about three percent of the overall market, the most influential, hardest working and wealthy travelers typically leverage the added productivity of premium private car service.

This positioning has been challenged by global app-cab platforms to share personal cars which blurs lines and may have travelers and travel managers begin to question our value equation. Many observers have thought that our niche would be further eroded by futuristic mass transit algorithms, automated marketplaces and artificially powered robots.

‘Yes,’ we had to re-energize to show that a qualified, duly vetted, trained, briefed, managed and committed professional driver in an impeccably spotless premium vehicle has remarkable value. Such service keeps you safer, more productive and greatly increases the peace-of-mind of the traveler as well as that of his family and his corporate risk manager.

If your team’s travelers are flying business class and staying in premium boutique hotels, they command the added comfort and productivity of a professional private car service. Luckily, Teddy’s professional private sedan service from, say LaGuardia to Westport or JFK to Stamford is still about $100 less than UberBlack during busier times of day at airports!

To this, add the new dimension of travel during the COVID crisis. “Premium private car” has always helped business travel managers feel assured their Duty of Care responsibilities are met and this is now more crucial than ever. As our industry deploys the safest and most stringent COVID protocols, business travelers, older people and families, being cautious, will favor our pro solution and much more lightly used vehicles over jumping into a random personal-car driver with a cab app and many times the per-day fare count.