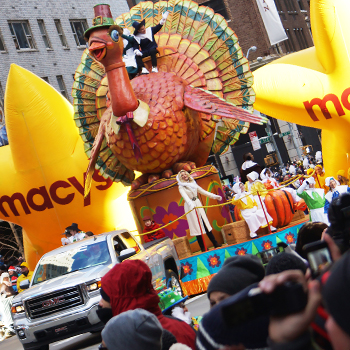 There are few things more “New York” than the Macy’s Thanksgiving Day parade. Held nearly every year since 1924, it’s one of the biggest events the City has to offer, and one of the most extravagant celebrations in the country. The balloons, floats, celebrities, marching bands and the excitement of the crowds are a memorable way to start Thanksgiving Day and kick of the Christmas season.

If you’re thinking of going to see the parade in person, there are a few things you can do to make sure your day goes smoothly.

What to bring and what to leave at home

First of all, be prepared: wear layers of warm clothing, in case of cold, rainy or windy weather. Make sure all the cellphones in your group are charged, just in case you get separated. As a last resort, decide on a meet-up spot. And leave your lawn chairs at home. It’s too crowded and someone will invariably stand in front of you.

Get a good spot

Get there early to get a great viewing spot along the parade route. Most visitors arrive after 7 am, so arriving around 6 am should secure you a good location. Here are a few viewing areas to consider:

Finally, don’t drive! Other drivers overwhelm the streets and although the parking garages are open, the traffic on parade day can be overwhelming as well as confusing. The subway is an option, but an even better one is hiring a private car. If you’ve ever wanted to see the parade up close but it seemed overwhelming, a private car will eliminate the hassle of driving and parking and bypass the crowds on the subway. Your chauffeur will simply drop you off at a chosen spot before the parade and pick you up wherever you choose at the end. If you choose to stay in the City, you can explore Times Square, Central Park or Manhattan’s many other options.