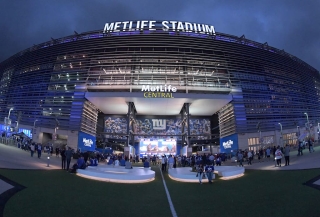 Trying to get to MetLife Stadium to see a Jets or a Giants game? Even if you’re not coming from New York City, it can be a hassle just getting there. Add in trying to battle your way from the Big Apple and the difficulty intensifies.

Want to choose the best and fastest way to get to MetLife Stadium from New York City, for your budget and preferences? Check out the transportation options below to discover the best way to get to the big game.

Driving from New York City to MetLife Stadium is pretty quick. It takes less than a half-hour to get from Manhattan to the Meadowlands Sports Complex (the stadium’s location). However, your driving time can be increased if you hit a delay, such as heavy traffic going out of the city on the weekend or construction, but otherwise you won’t find the ride too long.

Once you reach the stadium, you’ll need a pre-paid parking permit, which can be purchased from ticket vendors like StubHub. The average parking pass cost is $30 per vehicle. If you didn’t purchase a parking permit in time, you’ll be required to park away from the stadium and take a shuttle there.

The one major complaint that event attendees have when parking at MetLife, though, is the amount of time it takes to leave the stadium after an event ends.

There are several bus routes that can take you from New York City to MetLife Stadium.

A Coach USA 351 Meadowlands Express bus leaves from 41st Street and 8th and 9th Avenues, with tickets available via the Port Authority. Other lines include the Line 160 bus via Paterson Plank Road at Gotham Parkway and the Line 85 bus.

Taking a bus to the stadium takes a little bit more time than driving yourself, anywhere from half an hour to a little over an hour. It’s also very affordable, under $10 per person each way, and you don’t have to worry about the cost and hassle of parking.

NJ Transit operates rail services to the Meadowlands Sports Complex, too. You can take a train from Penn Station to Secaucus Junction, then connect to Hoboken and take the train straight to the stadium from there. If you’re willing to put up with the various rail changes and finding your way along the New Jersey public transit system, then you can reach the stadium from Manhattan in approximately 45 minutes to an hour. The cost is under $20 per person.

By far, the fastest way to get to MetLife Stadium from New York City is Teddy’s Private Car Service, for several reasons. You have the speed of taking a car and not relying on public transportation that requires multiple stops along your journey. In addition, you don’t have to worry about taking the time to find a parking spot; you don’t even have to worry about walking from a far-away parking spot to the stadium. Teddy’s takes you straight to the entrance and picks you up there, too, making Teddy’s the fastest way to get from Manhattan to MetLife. To schedule a private car service for your next outing, click here.